When evaluating potential speed limits for E-scooters, governments should keep in mind traffic goals for their locale and four key stakeholders: E-scooter riders, pedestrians, bicyclists, and motorists. Depending on the desired traffic goals for the locale, governments should evaluate stakeholder interests to determine if setting a speed limit for E-scooters is appropriate and, if so, what that speed limit should be. The main consideration that will go into determining E-scooter speed limits is where E-scooters can be ridden. For a deep dive on this topic, please visit Where to Ride.

Washington, D.C. has implemented a 10mph speed limit for E-scooters in the city, and E-scooter riders are not permitted to ride on the sidewalk in the city.[5] Washington, D.C. arrived at 10mph as the appropriate speed limit for E-scooters by choosing to permit E-scooters as personal mobility devices (hereafter “PMD(s)”).[6] Under 18 D.C.M.R. § 9901, a PMD “means a motorized propulsion device, designed to transport only one person or a self-balancing, two non-tandem wheeled device, designed to transport only one person with an electric propulsion system, but excluding a battery-operated wheelchair.”[7] PMDs are subject to the Personal Mobility Device Amendment Act of 2006, which states that a PMD shall not be operated above the maximum speed limit of 10 mph.[8]

One advantage to Washington, D.C.’s approach of categorizing E-scooters within the existing PMD vehicle definition is not requiring a new law for speed limits for E-scooters. Instead, the city can utilize a law that has been on the books since 2006.

One disadvantage to Washington D.C.’s 10mph speed limit has been negative reaction from E-scooter companies.[9] Bird sent a letter to Washington, D.C. Mayor Muriel Bowser opining that the new speed limit could make roads more dangerous.[10] “Vehicles traveling at significantly different speeds. . . could increase opportunity for collisions between cars, e-scooters, and bikes,” Bird said.[11] “There is also no data to suggest 10mph is safe for E-scooter riders than 15mph.”[12] Spin expressed concern that the 10mph speed limit could negatively impact the use of E-scooters, stating “we hope the city reconsiders this piece of regulation, so they don’t unintentionally limit usage of an environmentally-friendly transportation lifeline.”[13]

Given the negative reaction from E-scooter companies about a 10mph speed limit, governments looking at Washington, D.C.’s approach should be aware that the city could have chosen to regulate the speed limit of E-scooters the same as E-bikes, which are restricted to having a motor incapable of propelling the device at a speed of more than 20mph on level ground.[14]

For Portland, Oregon’s E-scooter pilot program, riding E-scooters on the sidewalk was prohibited and the speed limit for scooters was set at 15mph.[15]

The PBOT concluded that E-scooter riders illegally riding on sidewalks when they felt unsafe on roads and pedestrians feeling unsafe because of illegal E-scooter sidewalk riding demonstrate how important it is to have protected facilities that minimize conflicts between pedestrians, E-scooters, and motorists.[22] Governments considering speed limits for E-scooters would benefit from further looking into the challenges and findings that Portland’s E-scooter pilot program has revealed.

Austin, Texas is an example of approaching speed limits for E-scooters based on the demands of specific locations. Initially, Austin passed a law which stated that for all dockless electric scooters and bicycles used in Dockless Mobility Systems, the maximum motor-assisted speed for licensed units shall be 20 mph when ridden in the street environment.[23] Recently, E-scooter companies worked with University of Texas’s Parking and Transportation Services (hereafter “PTS”) to limit E-scooter speed to 8mph in campus areas with heavy pedestrian traffic.[24] PTS announced the new speed limit to students in an email on January 22, 2019.[25] The speed limit will be enforced via virtual geofence using GPS, so that when an E-scooter enters a geofenced area on UT campus, the device will gradually decelerate to 8mph.[26]

In regards to arriving at 8mph as the appropriate e-scooter speed limit for heavy pedestrian-trafficked areas of campus, PTS director Bobby Stone said, “We wanted to make sure that the speed that we use at the rate which we thought was safe to mix with pedestrians, but we also wanted to make sure that the speed allowed the scooter to continue to operate safely.”[27] For streets on UT campus such as San Jacinto, which passes by the football stadium, the speed limit for E-scooters will still be 15mph because E-scooters often mix with cars in these areas.[28]

So far, feedback from students on the new E-scooter speed limit has been mixed.[29] Biology sophomore Sinyoung Lee said, “It’s still a lot faster than walking. I’d say if I was in a hurry, it’s something that I would resort to.”[30] On the other hand, Government freshman Michael Rigsby said, “If I could only go 8mph, I’d rather walk and not spend the money because it’s not really worth it. It wouldn’t help me get to class much more.”[31]

Governments that are interested in exploring dynamic E-scooter speed limits based on different demands of specific locations should look at the approach to speed limits taken in Austin, Texas. 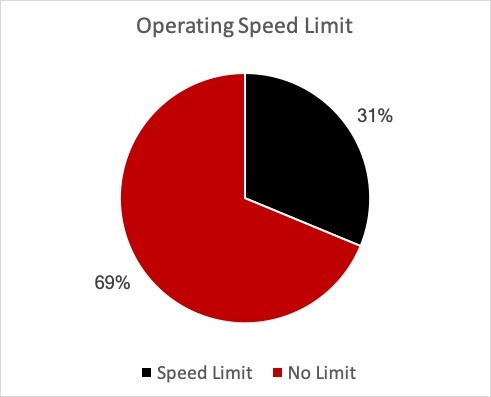 ü* Indicates age restriction on Helmet Requirement
*This is a sample of cities, selected because of their readily available regulations and ordinances. In no way is this list meant to be exclusive.